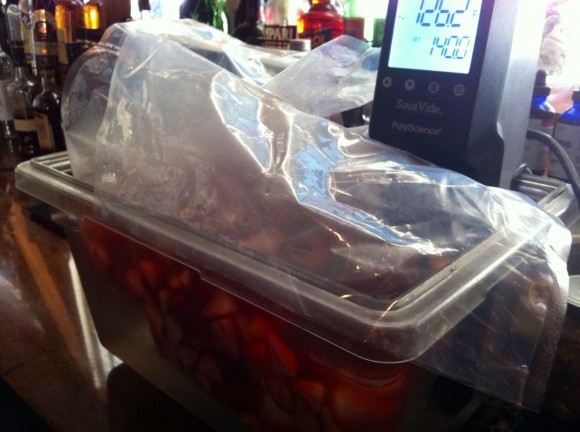 Head scratching and head spinning often results when the question arises about the difference between maceration and infusion. Chefs and bar pros often give different answers. Pull out good ole Merriam-Webster and the head scratching continues. Maceration is defined as “to cause to become soft or separated into constituent elements by or as if by steeping in fluid; broadly: steep, soak.” Merriam-Webster tells us that the verb infuse means “to steep in liquid (as water) without boiling so as to extract the soluble constituents or principles.” Are we clear, yet?

In his mind, maceration often involves fruit in a decomposition process usually in its own juice, such as the crushing of grapes in the fermentation of wine. He always thinks of infusion as flavoring oil, alcohol, or other liquid with herbs, spices, fruit, or various other products. “I start with an infusion every day…in a French press,” he joked.

Basically, maceration involves soaking food in liquid to infuse flavor. An infusion is a very simple chemical process when botanicals release their active ingredients easily in some sort of liquid like water, oil or alcohol and may or may not involve some sort of heat. The botanicals are typically dried herbs, flowers, fruit or vegetables.

When we stuff strawberries into a bottle of tequila, we infuse the tequila with strawberry flavor. The softened fruit macerates. In making a mojito, we muddle mint in a rum drink. The rum is infused by the mint. The mint is macerated.